Many soldiers experienced physical and psychological trauma during World War II.  Many of the American soldiers who liberated concentration camps in Europe were distraught with the sights they saw.  This photograph, of Buchenwald Concentration Camp, is part of the collection donated to the Louisa County Historical Society and is housed in the LCHS Archives.

Constructed in 1937, Buchenwald Concentration Camp was one of the largest concentration camps in Germany. The prisoner population was only male until about 1943. Most of the prisoners were political prisoners, Jehovah's Witnesses, German military deserters, Roma and Sinti (Gypsies), and prisoners-of-war (POWs). Approximately a quarter million people were imprisoned in Buchenwald between July 1937 and April 1945; it is estimated that 56,000 male prisoners, of which 11,000 were Jewish, were murdered in the Buchenwald camp system. George Marshall, who donated this collection, was part of a military group arriving post liberation, which was April 11, 1945. 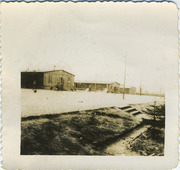