Volunteering to Win the War

Following the attack on Pearl Harbor, many citizens became fearful of additional attacks on American soil.  While many could not enter into military service, they opted instead to volunteer some of their time to aid from their hometown.  A pin and identification card were given to volunteers of the Aircraft Warning Service.  “During World War II, I served as an airplane spotter, one day each week from 4 P.M. to 8:00 P.M. at the Old Coppage Farm on the Yanceyville Road, not far off Route #208.”  This is a quote from Mrs. Mary E. Wright Mills Richardson, then Ms. Mary E. Wright, who donated this pin to the Louisa County Historical Society. 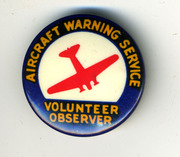 Many young men were absent during this time, leaving young women to take up certain tasks and participate in a home front effort driven by rationing, Victory Gardens, and other activities, such as the Aircraft Warning Service volunteer program.  This is another pin given to Mrs. Mary E. Richardson for her volunteer service as an observer for the Army Air Forces Aircraft Warning Service.  These pins were a source of great pride for many citizens, as it provided them with a sense of involvement in the war-winning effort.

This group photograph was taken on August 14, 1942 at the Louisa Observation Post; their group name, “Three Roses and Two Thorns”, is written on the back of the photograph, along with their nicknames.

In this photograph, one observer – Pauline Towsey – stands inside the shack used by the group during their volunteer time.

In the audio clip, Mary "E" Richardson tells how they identified and reported the airplanes passing over their small observation station on the Yanceyville Road.    She also recalls the romance that inevitably was sparked between the young female observers and the handsome soldiers who came from Richmond to supervise their work.

This armband immediately identified the wearer as a member of this important civilian volunteer corp. This armband is from the collection of the Goochland County Historical Society. Spotters were stationed in every county and state across the Atlantic Seaboard

Volunteers typically served only once per week, so clear reminders of protocols were vital for consistency of reporting and information. Each volunteer was thorough trained by use of this manual, clearly identified as "restricted content", to identity aircraft and understand the procedure for reporting sightings to the nearest Army station.

This page gives a quick review of the instructions volunteers were to follow to send a "flash" report upon spotting any aircraft near their station.

This short form was completed before calling in a "flash report."

Norma said that she and her husband, Millard Filmore Peers, lived in the Green Springs. Fill's parents owned a large property on the north side of Rt. 22, a mile or so east of the intersection of

On the southwest corner of the intersection sat Fred Gallion's service station (where the Shell Station is today).  On that property was a small house where they reported any plane activity.  She said they usually worked in shifts, from 6 PM to mid-night or mid-night to 6 AM.  In addition to Norma and Filmore, she remembered that Alfred Peers (her husband's brother), Thomas Leckie and his sister, Catherine, and Francis & Fredericka Purcell also were spotters.  She said there were probably others, but she does not remember. Their job was to listen for planes, any planes, and report it at this building at "The Corner."

On the Peers' property (at the old home place) was a landing strip.  Norma said this strip was also a place where folks spotted planes.

Tom Leckie said that he and his sister, Catherine, spotted planes, from their parents' farm, located on Rt. 22, about four or five miles east of the intersection of Rt 15 & Rt 22. They spotted planes, both single engine and bi-planes and the direction the planes were headed.  Their job was to report any activity by phone (a no-charge long distance number in Richmond).

Tom served as a spotter from 1941 until 1942 when he enlisted. At first he tried to get into the Navy, but they said he couldn't see well enough to use a gas mask.  He then tried the Army and they gave him a gas mask with built in eyeglasses. So, he served in the field artillery in Belgium, Germany and France.  He does not remember if his sister continued to spot planes.  Tom returned from war in 1945.