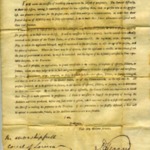 Patrick Henry lived five miles south of Louisa at his home, Roundabout. He recieved the property on which he built Roundabout from his father, John Henry of Hanover. Henry had the house built in 1765 so that he could reside there as he began his political career representing Louisa County. Many stories are told of Henry walking to Louisa Courthouse with his dog and gun. His house was situationed on a hill overlooking Roundabout Creek, from which the house got its name. In 1773, upon his return to Hanover County, Henry sold the property.